ARR was not much of a resort, but it was a pretty good camp site. DH reserved a site with water & power hookups. It was pretty cool to have hot water and electric lights in the tent trailer. The camp site was about 100 feet from the American River. Unfortunately, we had some boys tent camping below us who were very loud and swore with little imagination around 11 pm on Wednesday night. On Thursday night, we had a bunch of partiers move in next to us, but one of them was very concerned that Chunguita get a good night’s sleep, so she kept hushing people. I really appreciated that.

We drove up Wednesday night. It took us much longer to get there than we expected because the trailer hit resonance at 55 mph, and DH was afraid to try to drive any faster. So we toddled along at 50 mph. Chunguita slept the entire way up. The daycare staff kept her up from her nap until we got there. DH had asked them to do this. She usually goes down between 12:30 and 2:30. We picked her up at 2.

I took Chunguita up to the swimming pool, where we met a couple of nice families. They liked Chunguita. Robert spent that time setting up the tent trailer and making dinner. The only problem for me on this camping trip was that I’m deathly (and rightly so) afraid of being stung by a bee. Robert had these smoky incense thingies that were supposed to keep the mosquitoes away. We tried them. It worked very well to keep the bees away and the mosquitoes. It didn’t work on the flies. DH went out and bought a screened in room so that next time I won’t get scared by the bees.

The first night, we decided that Chunguita needed to be washed up, so we all went up to the showers. They didn’t have a family shower, butthere were a bunch of young teenagers goofing off in the women’s restroom, boys and girls. The boys got all embarassed, but I told them not to worry about it because my husband was coming in to help me give our baby a shower. Chunguita didn’t like the shower. The teenagers were cool about it, but when we were leaving, some guy gave DH a hard time about coming out of the women’s restroom. I told guy not to be a moron; we had to give out baby a shower.

We all slept very well. Our trailer has 2 kingsized beds and 2 more very little beds.

On Thursday morning, DH made the most wonderful bacon and egg breakfast. The we went over to the state park. It was so hot. Chunguita had a blast playing in the dust and running back and forth between me and DH. DH & I learned all about James Marshall and John Sutter and Coloma.

There isn’t much in Coloma, and I wanted an air-conditioned restaurant for lunch. We stopped at one, but it was a bar. The second one looked like a bar, but I could see people drinking soda or ice tea in the window. The potatoe salad there was excellent, and they gave us free refills on our lemonade. We tried to go back to the campsite for Chunguita’s nap, but it was 95F in the tent, so DH decided to drive me around to the wineries. There are 2. Gold Hill winery had a most excellent Sirah, so I bought some for DH. Venezio had a nice late harvest Zin. I bought some of that.

After Chunguita’s lunch, we braved the American River. There was a nice swimming hole right by our campsite, and this was the one time I was glad it was so hot. Sierra rivers and creeks are very cold. Chunguita and DH sat on a rock while I swam around. There was a styrofoam cup floating up-river. Chunguita thought it was very funny that I would play with it.

After the river, we had dinner. DH is a great cook. Then we went swimming in the pool until the staff came and told us that it was after dusk and we had to get out. That was Chunguita’s bath.

On Friday, DH made a great pancake breakfast and we packed up and headed home. I got home in time to go get my allergy shot.

It was a very good trip.

Luckily for me, Chunguita doesn’t have them (yet?). My younger brother sure did. He has dyslexia (more severe than the rest of us), and he would get so frustrated that he could do his math problems in his head but he couldn’t write them down. He would lock himself in the downstairs bathroom and scream. My mother really suffered thru that. I remember her crying and begging him to come out. (Needless to say, the lock on that door was removed, permanently.)

I do like the outdoors, as long as I’m fully dosed with my antihistamines and carrying my inhaler (asthma) and my epipen (anaphlyactic kit). Oh, and I can’t bear to walk thru rye grass. My allergies tend to inhibit me, and I’m terrified of a bee sting.

I think the real reason that I have resisted camping with DH is that when I was growing up, we’d go “camping”. Our camping trips were these horrifically long road trips. My mother would roust us out of bed at 6 am. We’d spend 2 hours on breakfast and breaking camp then get in the car drive for 8 or so hours. The driving would be broken by a 2 hours stop at some terrible diner for lunch and waiting for my father to have a bm (at least, I assume that is what he was doing in the bathroom). We’d hit the next camp site just before dusk and spend 2-3 hours getting dinner, setting up, cleaning up after dinner. Then it was time for bed. 6-8 hours later, we’d get rousted out of bed to start the joyful process all over again. This would go on for 2-3 weeks, and maybe we would spend 2 nights at one site every now and then.

It was not a good vacation for a kid.

We didn’t take Henrey this time, but DH wants to take him next time. I’m not sure this is such a good idea. We’ll see.

DH bought a tent-trailer. We’re going camping this afternoon. I wasn’t thrilled that DH bought the trailer, for a good price, but then he spent another $1000 getting it all stocked. Money is a little tight right now, and he doesn’t want me to go back to work fulltime, which is sweet, but not realistic.

We’re going to the gold country. It is only supposed to be 95F (not too toasty) today and tomorrow, and 100F on Friday. Wish me luck. I hate camping.

A chemical pregnancy is when the egg fertilizes but never implants. So, you get an initial surge in PG hormones and then it all goes away.

I’m suspicious that this might be happening with me. I’ve had a few longer cycles, and in the last one, I got a temperature rise 10 days past ovulation. If only BH would go in for a sperm analysis, I’d feel better about spending the money on an endless supply of ovulation predictor kits and pregnancy tests. Slightly more than 50% of the time, fertility problems are in the man. And further, the sperm analysis is covered by our insurance, so it’s free.

I’m so bummed. We’ve been trying since January. I really got my hopes up this cycle because I had a nice temperature rise 10 days past ovulation. Unfortunately, yesterday, it fell, and, today, it fell more and I got my period.

I have to admit that last night while I was nursing Chunguita, I was thinking that I’d like to have more time with her as my only baby, and that I would like her to not be a baby anymore when we have the next one.

Last night, she was sitting in my lap nursing. I’d lean down and kiss her on the forehead. She’d make happy, nursing sounds and look up at me with those big brown eyes. I don’t want to give that up because my breasts are too tender, and I don’t want her to feel pushed out of her space by a new baby.

I’ve been thinking about what you-all said about the the difference between ~30 months and 3 years. I’m just concerned that if we wait for 6-10 months, then it will be a year again before Kaiser will talk to us about infertility. I’ll be 38. I want to be done having children by 40. I suppose I could lie to Kaiser about it.

DH and I have talked about adoption. DH would really like to adopt. I looked into adopting a baby from China. We decided against an American baby because of the unavailability of healthy babies. We first thought that we would adopt from Mexico or another Latin American country, but after doing some research, I think that China is a better option.

I have a couple of issues with adoption. First off, we need about $15,000 (USD) for a China adoption. DH is not capable of saving money. I can’t continue to save for college and retirement and come up with $15k in a couple of years.

The second issue is that I have 2 adopted siblings. I’m not sure that mixing adopted children and biological children is such a great idea. Altho in our case, we won’t be having babies after we adopt, and so maybe the big problems that my family had just won’t be an issue for us. Or maybe my family would have had similar problems even if my younger brother and I had never been born. It’s complicated. If we do adopt, I definitely want Chunguita to be older and to want to have a little sister or brother.

It varies. Somedays Chunguita eats everything, and somedays she picks. For a while, if she didn’t eat her lunch, she would eat dinner and vice versa. Isable loves green food, yogurt, and watermelon.

We use a guardrail on the bed for Chunguita. It raises and lowers, so that I, ever the optimist, can go to bed with it down and raise it when I go get Chunguita. This way, I can sleep on either side of her and get up while she still sleeps. She isn’t so active that she has ever ended up at the bottom of the bed beyond the rail.

When I say singing for an hour what I really mean is that I’m lying next to Chunguita on the toddler bed with my eyes closed mumbling the 60 verses (that I made up) to “Hush Little Baby” or maybe it is one more rendition of “99 Bottles of Wine on the Wall”. Some nights we go thru 160 or so bottles of wine.

Why are all lullabies so ridiculously short? I get bored singing the same thing over and over again.

Usually, I don’t fall asleep while putting her to sleep, but this month has been tough. However, I do find that after lying in bed with her, singing, nursing, and patting, that I am sufficiently relaxed that I don’t need additional bedtime ritual to get to sleep. Usually, I have to take a long bath and read some more in bed (total time > 1 hour) before I can fall asleep. Now I can take a shower and read for 5 minutes (total time ~ 10 minutes), falling asleep easily. 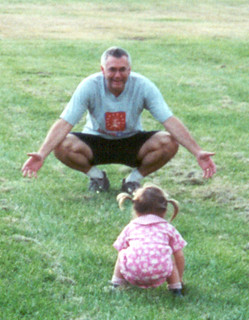 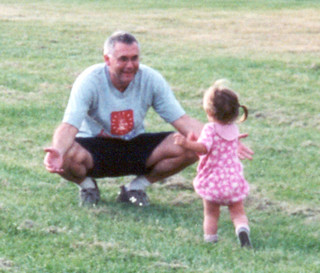 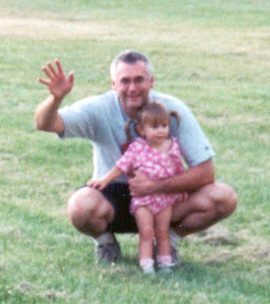