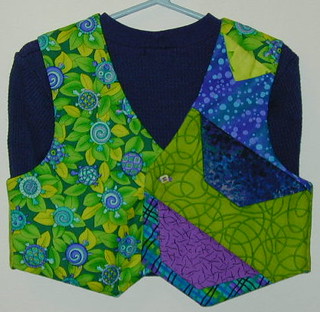 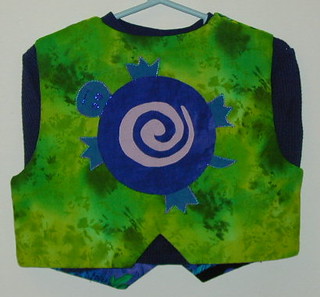 This is another gift. This one took me a few evenings and one 8 hour day devoted to design and sewing. I used the vest from the Little Sprouts’ Wardrobe by k.p. kids & co.

Because I was very time limited on this vest, I designed each piece as I went. To simplify the vest (and ensure that I would finish it in time), I decided to make one front on each side out of a single piece of fabric. For side A (above), I chose the turtle fabric and pulled about 50 different fabrics from my stash to go with the print. I didn’t have time to narrow the fabric selections.

I repeated the turtles in a big applique on the back of the vest using a turtle pattern from Colorful Quilts for Kids by Kari Pearson. The edges of the appliques are zigzagged. For the second turtle front, I used Judy Murrah’s “Lucy Loo’s Pockets” from Jacket Jazz Encore. 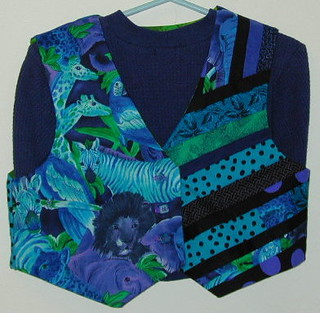 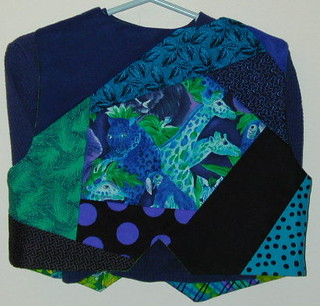 The feature fabric for side B is the African animals print in teal, green, purple, and black. For the back, I did easy crazy piecing with no embellisments, and for the front, I copied one of the styles from Carol Doak‘s Easy Reversible Vests.

Once the fronts and backs were done, I put the vest together using Sandra Betzina‘s Gold Medal Vest Lining. This method will give you a perfectly reversible vest. You can’t tell which side is the lining and which is not.

I’ve had a change of heart with respect to buttonholes. After reading an article in Threads 98, I embraced a 2-pass buttonhole method as recommended by Sandy Sweeney. 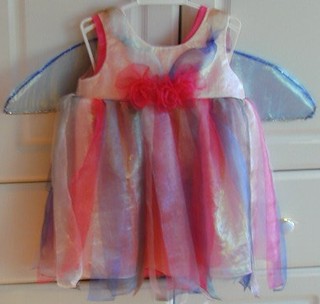 I made this lovely dress for my Isabel’s Halloween costume. She loves pink, and she loves wearing the hot pink slip and shorts, but she refuses to wear the dress.

My daughter refused to wear the dress. She likes hot pink and would wear the underdress and shorts, so I decided to rip apart the over dress and put all the ribbons on the underdress. 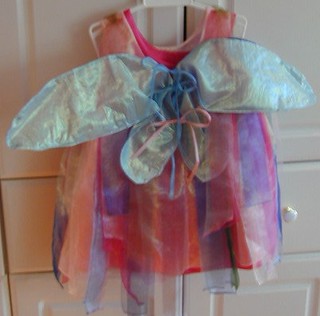 The dress is very easy to sew. The fabrics that they recommend are more difficult to work with. My daughter chose a hot pink acetate satin, which is ravely and slippery, for the underdress and shorts. Because I have a serger, it wasn’t difficult for me to work with, but I wouldn’t want to tackle this fabric on the sewing machine alone.

I chose a pale pink, acetate metallic fabric for the overdress. This fabric is just ravelly, and the serger makes it much easier to deal with.

Both fabrics are dry clean only, which is a ridiculous limitation for a child’s costume. I prewashed in cold and hung dry first 6 inch square samples, then the yardage, with no ill effect.

Modifications that I made:
1. I used regular ribbon instead of wire-edged ribbon. I think wire edged ribbon would be too pokey for a garment.

2. I used snaps for closures instead of hook & eyes.

3. I made the fairywings out of pale blue acetate metallic fabric, instead of paper, using pipecleaners to give the upperwing a little stiffness. 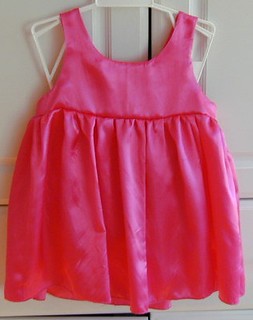 Modifications that I would make if I make this costume again:
1. I would only make one dress, not a dress and slip.

2. I would make my “ribbons”, probably with tulle, so I don’t have to worry about the long edges fraying. The fabrics for this costume are not expensive, but the ribbons are.

My greatest reservation in recommending this pattern is the expense of the ribbons. If you don’t have an outlet nearby, the ribbons can be a bank breaker. 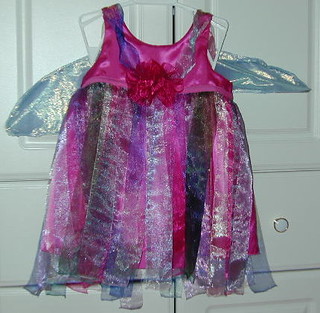 My biggest recommendation for this costume is to listen to your
daughter. My daughter loves the slip and shorts, but refuses to wear the overdress.She wanted to be a hot pink fairy, and I just didn’t listen. I’m going to remove the ribbons from the overdress and add them to the slip, but it would have been better if I had paid better attention to my 2 year old when we were picking out fabric.

In response to the question, “Have I had friends wear the costume to make DD want to wear it?” I suggested this to her, and she thought it was a great idea. In fact, she said she wanted to give the costume to her friend. 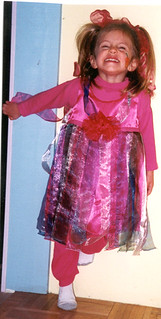 I ripped apart the overdress, cut the ribbons off of it, and serged the “skirt” ribbons across the top. I didn’t bother to make the skirt width the same as the ungathered skirt. It was wider then the gathered skirt, and that was good enough. By pulling one of the needle threads, I gathered the ribbon skirt until it was about an inch less wide than the underdress gathered width. I covered the serged edge of the ribbons with a hot pink bias tape and sewed that down around the waist of the dress. I didn’t want the ribbonsto overlap because I planned on using the bias tape as a tie to close the skirt and tie on the wings. The advantage of this is that the bias tape covered up my crummy gathering job on the underskirt. After that it was a simple task to hand sew the bodice ribbons back on.

Isabel is, too. She goes to bed at 9pm, but 9pm is just the start. DH
reads 3 books to her, then either he or I lie with her until she goes
to sleep. I’m sure she doesn’t fall asleep until 10 pm. Usually, I’m
so tired, that I fall asleep first. I wake up with a full bladder at
11 or so.

She wakes up at about 8am if left to her own devices, so she doesn’t
seem to need as much sleep as Alex. She takes a 0 minute (ie no nap)
to 2 hour nap at daycare.

However, since we both go to work, and daycare starts at 8 am, we wake
her up earlier. I’m trying to remember if it was tough at first or not
because Isabel has been going to daycare since she was 5 months old.
Some days, when DH would get her up, she would be barely awake.
Because they have snack at daycare at 8:45, we haven’t worried too much
about her eating breakfast. She’s awake by the time she gets to
daycare.

The biggest difference in what we do is that one of us lies down with
Isabel until she falls asleep. She’s still in a diaper at night, so we
don’t have to deal with going potty. We keep a sippy cup of sugarfree
lemonade by her bed. She isn’t allowed to get out of bed. Usually,
she doesn’t want to.

Isabel is doing very well. Last Tuesday, she decided she wanted to
wear panties to daycare. We packed 5 changes of clothes for daycare
and sent her off with high hopes. She had 2 accidents on the first
day, 1 on the 2nd, and none on Thursday or Friday.

Over the weekend, we had continued success, 2 accidents, late in the
evening, due to fatigue, I think. She’s pretty good at using the
toilet without a potty seat at home and at Abuela’s. If she had the
coordination and strength to turn on/off the water, she’d be pottying
all by herself.

We still use a potty seat for the hall bath, and she’s too short to
climb up on it without help. I asked if she wanted to just use the
toilet seat, and she said she likes her potty seat.

She’s still in diapers for nap and nighttime sleep, and she asks for a
diaper to go poop.

I’m not having the same problems as with Isabel. I have to pee a lot,
but my bladder isn’t spasming or causing contractions, so that’s good.

My pubic bone hurts when I stand. I ordered a belly-bra that transfers
the weight to the shoulders and hips, so hopefully that will help since
I can releive the pain by holding my tummy. It’s not supposed to come
in until Nov 19th, tho. And I’m getting muscle cramps on the sides of
my abdomen which are very painful.

I’m carrying this baby much higher than with Isabel, but my appetite
doesn’t seem to be affected. 🙂

My blood pressure was elevated a couple of weeks ago. It’s back to
normal, 108/65. The NP wanted to know how I did that, and I said, “I
told you I had a virus.” I wasn’t very happy with her over this
elevated blood pressure. It wasn’t that high, 145/75, came down to
132/72 before I left their office, and I had an anxiety attack over
preeclampsia over the weekend, ending up back at the doctor’s on
Monday. I didn’t see her, and they were great about it when I told
them that it was probably an anxiety attack and I felt a little silly.
I’m just terrified that the preterm labor will happen again.

Poor Isabel got scared by the ab cramps. She’d come and got in bed
with me, and I had to get up to go potty. It’s not so easy to get out
of a king sized bed with a toddler on one side and a bodypillow on the
other. I got to the foot of the bed and couldn’t go any farther.
Isabel got very concerned, climbed out of bed, asked what was wrong,
and started screaming for her father. All in all, she was very
effective. He came running, took her away, and I was able to go potty
and go back to sleep for 2 hours. We may try it again sometime. 🙂

Last night, Isabel and I were lying down, having our evening chat
before she went to sleep. She likes to put her hands on my tummy. For
the first time, she felt Tony kick. It was kinda funny.

She’s chattering away. He kicks. Her hand jerks back, and she stops
midsentense.

“Yes.” in a very little voice.

“That was the baby kicking.”

“That was Angel in Mommy’s tummy?”

After a couple of minutes, she puts her hand back on my tummy.

We get Ladybug magazine, and they always have stuff at the end that
yhou can cut out and play with. One month they had a memory game which
I thought would be good for Isabel, so I laminated it, cut it up, and
tried to play it with her. She really like the little laminated cards,
but instead of playing the game, she took them all away from me and put
them in her wallet.

Isabel wore her costume!!! Actually, she wore it last week for dance
class because all the other kids were in costume.

She was so excited about trick or treating. She did eat her dinner,
but she was a wild thing. And she cooperated when I put hot pink
sweats and a hot pink turtle neck on her to go under her hot pink fairy
costume. She refused the wings (blue), but she wore hot pink ribbons
in her hair.

I think next year, I’m just going to paint her hot pink. 🙂

After 4 houses, she was ready to come home. I was kinda sad because
all the neighbors wanted to see her. And DH wanted her to go to the
houses where they give a way big candy bars.

Since she only went to 4 houses, we let her eat all her candy when we
got home.