Update/Correction:  I did not finish the sleeves with a rolled hem. I turned under 1/2″ and hemmed them. The yellow dots in the image are pin heads and the buttons are pinned to the tail. 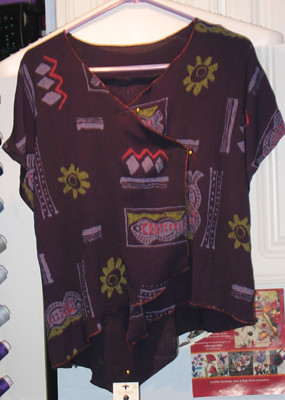 I still like it a lot, probably because of the fabric which I LOVELOVELOVE, and I finally decided on small black buttons. Now, I have to decide where to place them. It would be much easier if I weren’t concerned about nursing access. I’m thinking of doing just 2 buttons, up high; when I use the pins, as shown in the image, it stays closed but allowes for easy nursing access. I could do 4 buttons, but then I’d have to unbutton to feed DS, and I find the more fussing you do to get ready, especially if it looks like you are undressing, the more attention you draw to yourself. Anyway, I don’t think I’ll use the metallic thread on the buttonholes, just black.

Pattern Description:
Assymetric vest/top in 2 lengths and bias wrap skirt. I made the longer top.

Pattern Sizing:
It comes in one size. The back of the envelope gave a finished bust measurement of 40″. I’m not sure what that has to do with the pattern because that’s not the finished dimension . It’s more like 46″. The back also says “Measurements listed are approximate.”

Were the instructions easy to follow?
I don’t know. I didn’t follow them. I don’t think I even looked at them. There isn’t much to this top. Sew the shoulder seams, sew the side seams, finish the armholes, finish the neck, fronts, and hems, and do the closure.

What did you particularly like or dislike about the pattern?
LIKE: The assymetry of it. The simplicity of it.

DISLIKE: Not only is there one size, the the sizing information is incorrect.

Pattern Alterations or any design changes you made:
I added 1 inch at all side seams, including the armholes, which made a bit more of a cap sleeve top, not a vest. I cut 2 inches off the front overlay because it ended right on the middle of my breast, and I don’t think I need to call more attention to them.

I finished the hems with a rolled hem using a metallic thread.

There is no information in the pattern on where or how to do the closures, so you have to decide how to do that. I haven’t done them yet. The mermaid costume took priority.

Next time, I would lengthen short side of the front by an inch. It’s just a wee bit too short on me. And I think I will shorten the tail. I don’t have a flat butt, and the tail gets hung up on me.

I would recommend it to a more experienced sewer who is interested in experimenting. The one size issue and the lack of information on closures makes this pattern unsuitable for beginners.

WARNINGIf you are considering this pattern, take flat pattern measurements before starting. I shortened the skirt 9 inches and took 2 inches out of the armholes/upper chest/upper back. The waist on the skirt, as directed to be made, is more than 5 inches too big for my daughter, and as you can see, she is swimming in the top. 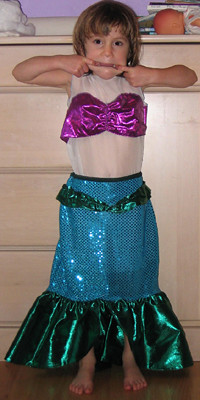 The costume top is as large as the bottom. The back of the envelope says that a size 3 is for a 38 inch tall child. My daughter is 38.5 inches tall. I didn’t bother to shorten the hem on the top, but I had to take 2 inches (1 from the front, and 1 from the back) out of the armholes/upper chest/upper back. I expected the top to be large circumferentially; DD is very slender.

Is it too much to ask that the pattern fit the sizes as indicated on the back of the pattern envelope?

Instead of hemming or binding the top, I did a rolled edge on my serger using a varigated thread. I really like that look on lightweight fabrics.

Pattern Description:
Costume pattern for Disney characters Jasmine and Ariel (mermaid). The top is a bra on a shell, and the bottoms are either yoked pants or a yoked skirt. This is for the skirt, only. I’m still making the top.

Did it look like the photo/drawing on the pattern envelope once you were done sewing with it?
It’s hard to tell with the mermaid in the picture sitting.

Were the instructions easy to follow?
I suppose, but they were terrible. I think Simplicity has tried to dumb down the sewing methodology. Instead of interfacing, they tell you to use 3 layers of the fashion fabric one of which is called interfacing. Instead of telling you how long to cut the elastic, they give you a pattern piece called elastic guide.

What did you particularly like or dislike about the pattern?
LIKE: DD wants to be Ariel for Halloween. There aren’t very many mermaid costumes patterns available.

Pattern Alterations or any design changes you made:
I used interfacing on the yoke. I lined the skirt and bound the waist because the confetti dot fabric was “owie”.

I cut 9 inches off the skirt length. Maybe it’s supposed to trail on the ground, but that just isn’t practical for a 3 year old. Because I cut off the 9 inches, I cut off the front slit/curvature. I debated putting the slit back on, but then the skirt would have been slit up to DD’s crotch, and that really isn’t a look that I favor for DD. I simply sewed the bottom ruffle on the bottom of the skirt.

I used my ruffler instead of gathering whenever possible.

The waistband elastic is about 4 inches too long.

Would you sew it again? Would you recommend it to others?
Probably not and no. I’m disgusted with this pattern. Instead, I recommend that you get a staight skirt w/elastic waist pattern and put a ruffle on the bottom. Heck, you could cut a rectangle of fabric for the skirt, put a waistband on, and add the ruffle.

I haven’t finished the top, but my hunch is that a top from a bikini pattern would work better than the shell/bra combo.

We’re watching the Wiggles, and I realize that Henry has shoes on all
his “feet”.

Me: Henry has shoes on all his feet.

DH: Yes, it makes it very difficult when he has to polish his shoes.

DH: How do you know dinosaurs stink?

Isabel: They told us at daycare?

DH: How … OH! Dinosaurs are extinct.

Isabel loves her dance class. She’s been going since she was 2. For
the first 6 months, she just stood there, sticking her fingers in her
mouth and nose. Because she said she liked it and she was always eager
to go, we stuck it out. Now, she’s doing great and wants to try and do
everything. 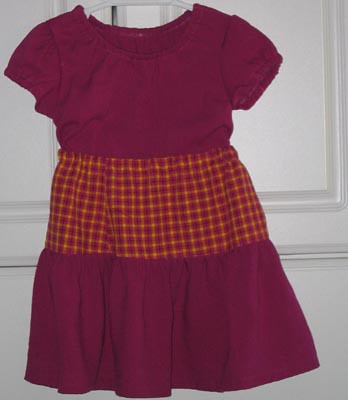 Pattern Sizing:
2-6X. I made size 3 based on DD’s height. If I used her circumferential measurements, the clothes would be too short. Since DD doesn’t care if her clothes are loose and I use Sandra Betzina’s recommendation of waist elastic 1.5 inches smaller than waist measurement, the clothes fit fine.

Did it look like the photo/drawing on the pattern envelope once you were done sewing with it?
Yes.

What did you particularly like or dislike about the pattern?
LIKE: The elastic for the sleeves is only on the top. For me, that would be much more comfortable than all the way around.

DISLIKE: It doesn’t say the top is a crop top, and you can’t tell from the cover. DD doesn’t care, but I would prefer a longer top for her. I think a flounce cut on the bias would be better.

Fabric Used:
Stash fabric from Joann’s clearance section. The plaid is 100% cotton, and the raspberry fabric is a nubby, drapey 100% rayon.

Pattern Alterations or any design changes you made:
I used my ruffler instead of gathering for the flounce.

Next time, I’ll lengthen the shirt, and if I make the skirt, I’ll cut the flounce on the bias.

Would you sew it again? Would you recommend it to others?
I definitely recommend the top. I might make it again. I have lots of patterns for DD, and I like to try things for her.

The skirt is okay. I think my reluctance for this specific pattern is that I really didn’t care for the style 20 years ago and my opinion hasn’t changed. It’s easy to sew.

Conclusion
A nice top with comfortable and currently fashionable sleeves. Both pieces are easy to sew.