Pix below the cut. 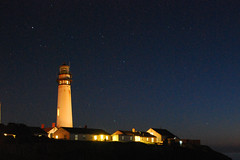 We spent the day at Pigeon Point Lighthouse State Park in anticipation of the annual lighthouse lighting.

The analysis indicates that the author of http://www.oaktrees.org/blog/ is of the type:
ESTP – The Doers

The active and playful type. They are especially attuned to people and things around them and often full of energy, talking, joking and engaging in physical out-door activities. True!

The Doers are happiest with action-filled work which craves their full attention and focus. They might be very impulsive and more keen on starting something new than following it through. They might have a problem with sitting still or remaining inactive for any period of time. True

parts of the brain that were dominant during writing

Someday, I shall visit!

When you give blood, you give life.

I made a banana bread from scratch, and Lily stole it. I caught her sneaking out of the kitchen with it in her mouth.

Slow, so slow. I was hoping to have it done to take to group tomorrow. Oh, well, next week.

The United States is a democracy. What does democracy mean?
That it meanes ordinary people deside who ranes the governmet.

Every four years Americans get to choose a president, the country’s single most powerful and important leader. What is different about this election?
That a girl ranning for vicepresident.

What are the many jobs the president does?
He is a comander and chief.
He leads the contry.
He makes new laws He leads in bad times and god times.

Who is eligible to be a president?
Congress set the rules to be president.

She voted for McCain in the classroom exercise.

I believe in giving children, and adults for that matter, information and letting them decide. I would never use my children to advance a political cause or candidate.

But I am pleased that Pulguito chose Obama. I don’t know why he chose as he did, but Pulguito was very vocal about it. I haven’t said so to my husband or daughter, but … really … Obama was the only logical choice. Just ask Pulguito.