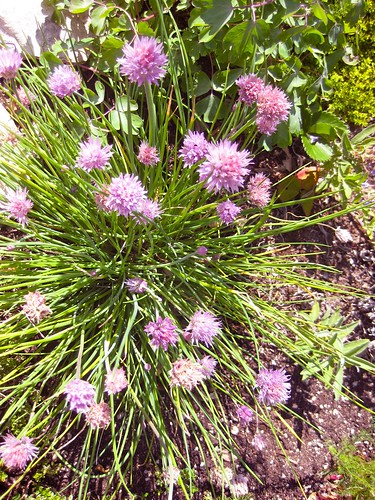 Sea Thrift – I doubt this will survive the water rationing. My girlfriend, Saundra, gave them to me. 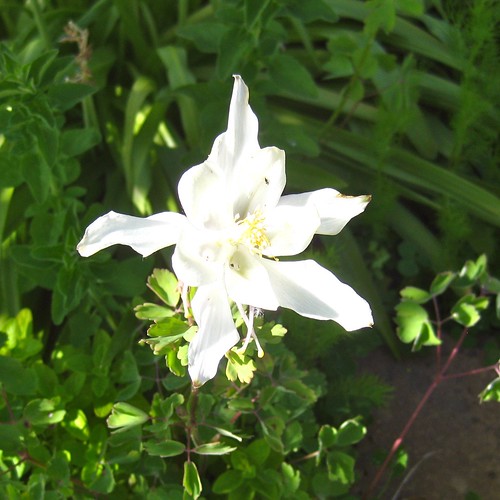 Columbine – This is another reliable bloomer in my yard. Supposedly, once established, this is a drought tolerant perennial. 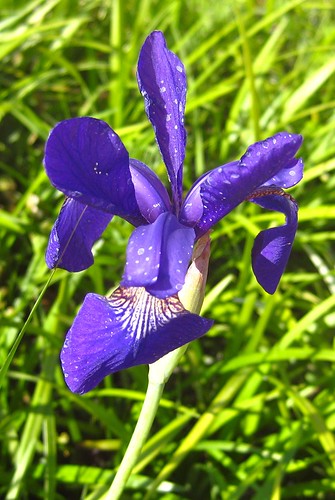 This is a Pacific Coast Iris. Once established, it also is supposed to be drought tolerant. We shall see. 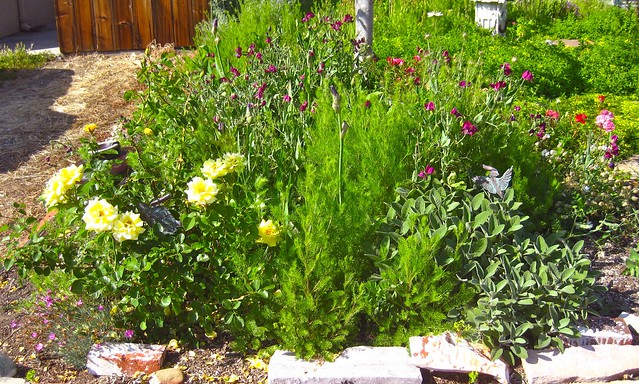 The southwest corner of my front garden.

Also called love-in-a-mist. It’s a lovely annual. I planted a variety pack several years (a couple of decades?) ago. I’m pretty sure the seed pack contained white, blue, indigo, pink flowers, and maybe lavender and indigo. I don’t recall if they were just doubles or singles and doubles. They have faithfully reseeded, turning my front yard into a nigella meadow every spring. I no longer have pink, indigo, or lavender flowers, but I have varigated(?) blue and white, as well as blue flowers and white flowers. Oh, hm. I just looked up nigella at my favorite seed company: Territorial Seed Company. The variety available is Persian Jewels which has varigated blue/white flowers. Perhaps that was the seed mix that I used. 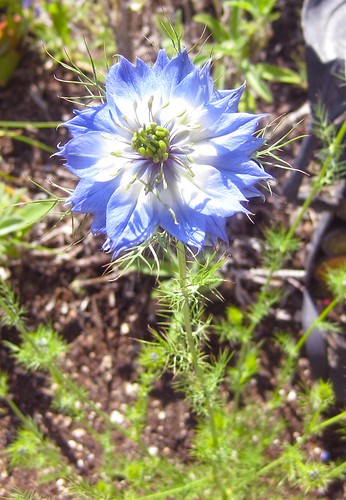 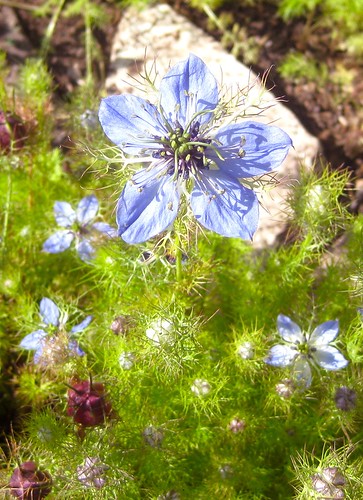 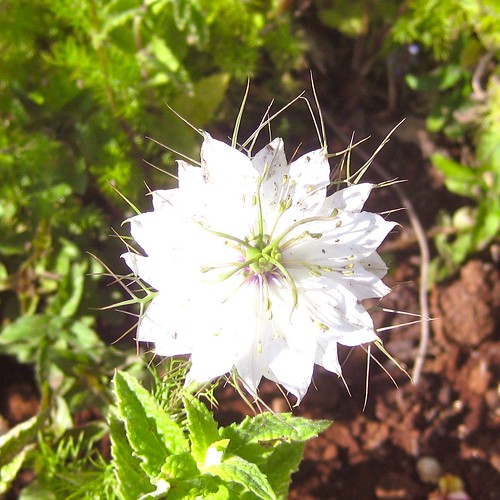 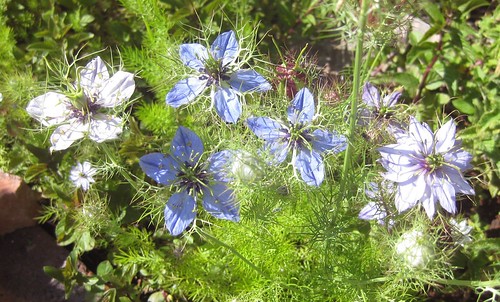 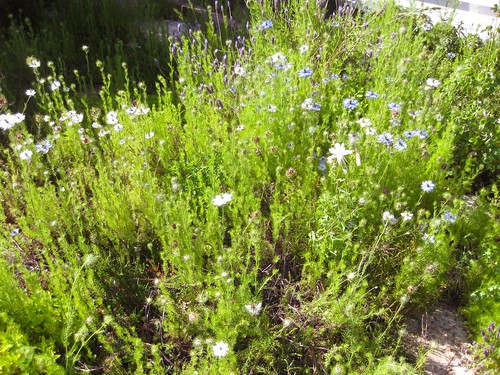 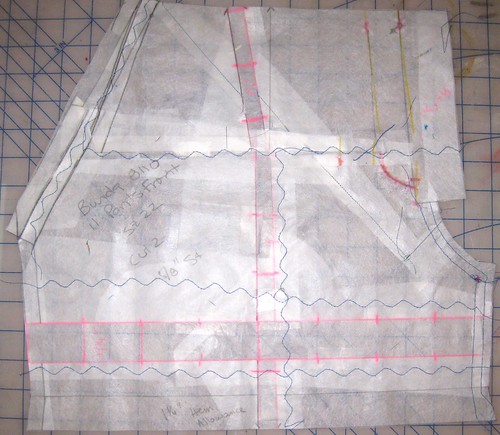 The image to the left is the front pattern piece for Burda 8110. Pattern sizing is a tricky thing. I often pick patterns that don’t seem to go up to my size. My top size is based on my shoulders and neck, and I’ve found the best way to get that size is to use my high bust. Being a member of the big ol’ dart club, my high bust is much smaller than my full bust, and I usually fit in size 18 or 20 in the Big 4, New Look, and Burda. My bottom size, however, is usually bigger than the patterns in the envelope. So when I make a pattern that isn’t from Sandra Betzina’s Today’s Fit line or Burda Plus, I start by tracing the largest size. I’ve tried to pin fit with tissue, but I shred the tissue.

After I’ve trace the biggest size, I sew the sides of my half pattern, grab some elastic and put the half pattern on. I have my husband measure the gap to center back, and I measure the gap to center front. I also measure how much excess I have in the front rise, and my husband measure how much is missing from the back rise. Unfortunately, you can’t figure out the wedgie factor at this point.

In the front pattern piece above, you can see the vertical slash that I used to add 1/2″ to the fronts. I also slashed the legs to add another 1.25 inches to the length. You might also notice that the vertical slant is tilted on the top half, and that side seam is incomplete. This pattern has a separate pocket piece that completes the side seam. 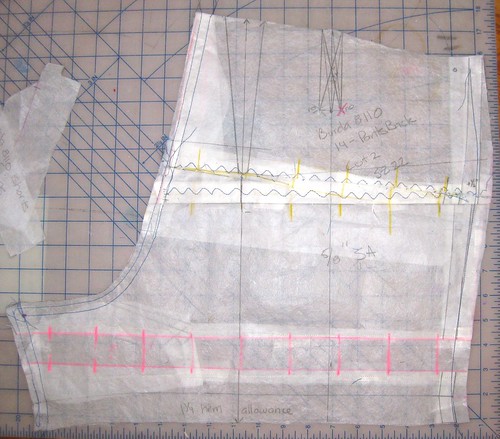 So much for consistency, what? Instead of slashing the back vertically, I decided to trace the side seam and move it out a half inch. Check out the grain line(s). My back rise is usually greater than the patterns, my side rise (or whatever it is) is usually about the same as the patterns, and my front rise is usually less. I have a protruding rear and a tilted waist. The tilted waist is very common in plus sized women. The protruding rear is a genetic gift that my mother gave to me and I have passed on to my daughter. To get enough fabric to cover my awesome ass, I slash from the center to the side seam and spread. I don’t know if you can tell from the picture, but the first time I was altering the pattern, I thought I needed more length to the side waist so I slashed vertically all the way across, and then slashed from the center back to the side seam and spread. Perhaps it is because I’ve lost weight, but I don’t need that much extra any more, so I folded it out (the opposite of slashing all the way across and inserting … oh … 2 inches of pattern paper). And it turns out that I don’t need so much rise to cover my ass. Or maybe I’ve gotten more comfortable with a lower rise waist level. So after folding out some of the rise, I slashed and overlapped (opposite of spread). That’s why there are 3 tops to the grainline line and 3 darts: the original grain line, the one from the slash & spread version, and the one from the folded back and overlapped version.

If you take a look at the front pattern piece, the tilted slash section (could be a grain line) is a result of my slashing from the side to the center to overlap out the same amount as I did to the side back. 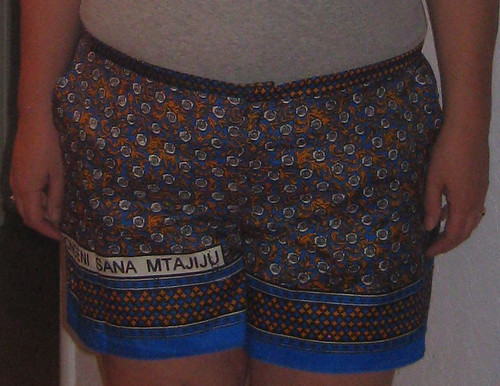 Because I’m an optimist, I put the fly in. Alas, the shorts have a serious case of camel-toe & wedgie. My crotch curve must be more square (or U shaped) than Burda’s (V shaped?). Not that I’m saying Burda’s crotch curve is V shaped, just more V-shaped than me. Because I put the fly in, scooping out the front crotch didn’t really work. The shorts are tight across the back, but pretty good in front. The back tightness surprised me because the pattern pieces have the same circumference as the ones I made when I was 20 pounds heavier. Perhaps it is because this fabric has zero give.

I could wear these. They really aren’t any worse than RTW. However, I was also playing around with pattern placement. I thought I might play up the border print at the side seams. I didn’t like it. I might still use it behind the pockets, but maybe not. It also occurred to me that I am easing the wrong piece at the pocket. I think what I am doing is adding to pocket gap.

I didn’t hem this version, and I like the length. I decided to lengthen the shorts another 1.25 inches so that I can hem the next version.

Stay tuned for the next version.

Pulguito requested an oreo cake for his birthday. I used a recipe from All Recipes. I may use the filling as frosting if I ever make another cake. The filling is tasty! 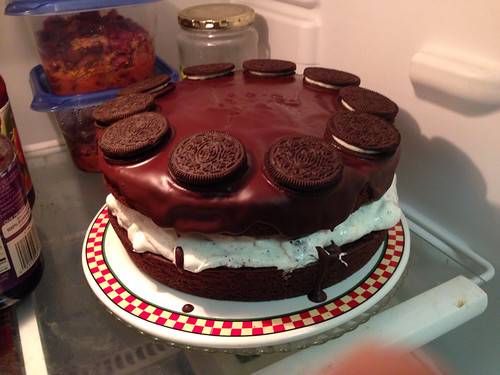 One of the things that is counterintuitive about eating disorders is that they serve(d) a very real protective purpose for the sufferer. I say counterintuitive because healthy people usually can’t imagine doing something so hurtful to themselves, and the idea that these behaviors are protective is mind-boggling.

So, here’s an example. This happened to me, or I did this to myself, what?

Do you all remember when Diego died? (If you feel like a good cry, you can read the whole tragic story.) It was truly awful.

Back to the eating disorder:
A few days after Diego died, I was sitting on the couch with Diego’s mom, holding her while she cried. I think she was saying something, but I can’t remember because I was thinking about how much bigger my thighs were than hers. That thought lead to things like: I’m so lazy, Why don’t I exercise more?, I’m a fat pig, What is wrong with me to get so fat?, I know what to do, but I’m weak, I hate myself, and so on and so forth. Am I good at self flagellation or what?

Those thoughts consumed me, and while my head was spinning with those hurtful, self-esteem destroying thoughts, I didn’t have face what was happening in front of me. There was a time when those thoughts did protect me from something worse than those thoughts. And it was terrifically emotionally challenging to take care of my brother and SIL while they navigated those first few months of child-loss. But, you know what, I was up to it. I didn’t need that protection, and I didn’t want it.

I’m not just a grown up, I’m a mature adult. Those things that hurt me, that I needed protection from, they aren’t part of my life anymore, and I’m not vulnerable like a child. I have the maturity, wisdom, and experience to distance myself, I have skills and tools, I am learned, and I am able to use all of that stuff to heal.

It took a while for me to figure out that ED was stepping in to protect me that sad December day. I first examined what was going on in group the day after it happened. I certainly needed help coping, but I shared it with the group as something that I was ashamed of. I wanted to help, but I was off in eating-disorder-land beating myself up.

Years later, I used it as an example of “not being present” because of the eating disorder. Being present is the vogue thing right now, what?

And, just recently, I realized that it was a case of ED stepping in to protect me from something horrific.

It makes me kinda pessimistic that we can help young women and girls who probably do still need that protection. I mean, I don’t need it, but I’m still struggling with ED.

Actually, it’s not that bad. Or maybe it is. The problem is in the crotch curve. It’s just not right for me. I’ve got camel toe in front and a wedgie in back. Scooping out the crotch curve may help, but I need that circumferential fabric that would be lost in the scoop. And besides, how do you scoop when you have a fly.

Oh, and the back crotch rise is too high at the back waist. 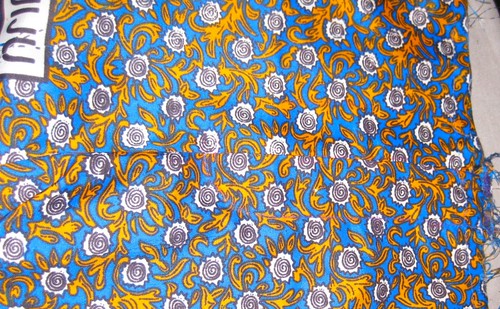 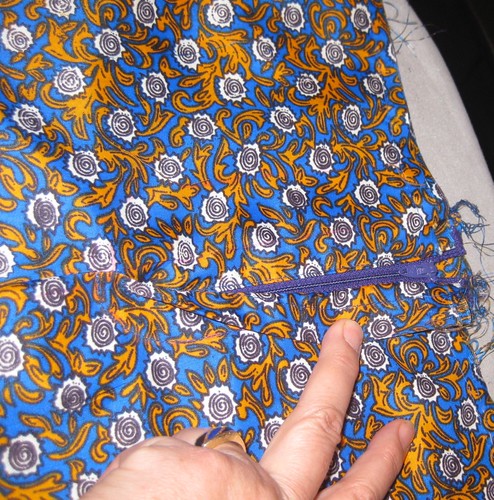 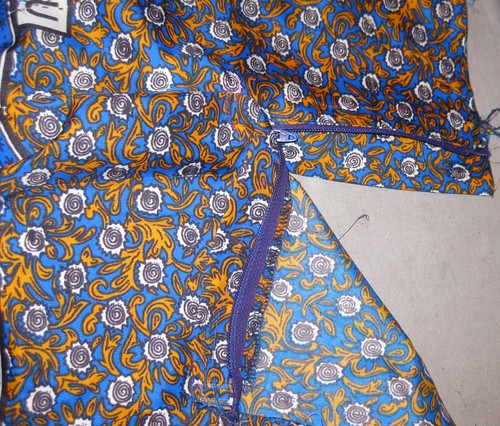 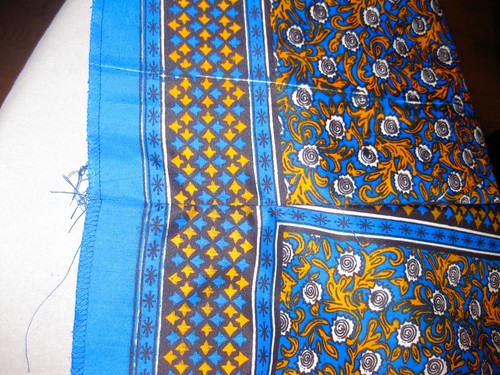 I’m making another pair of shorts (Burda 8110) for houseboat fun. This pair is more of a fitting toile than a wearable pair (altho …). I’ve made the top and shorts before, but fitting pants/shorts is really difficult on one’s self.

Rene brought me back this fabric from Tanzania. This piece has several flaws in it. It’s a kanga piece.

The two images below are my shorts fronts. I experimented with the border placement. I like it a lot across the bottom. It’s interesting using it as the hip piece (the back of the pocket). I’m not sure if I like it. Fortunately, the print is so busy, I don’t have to worry about matching; the pocket on the right is almost invisible. 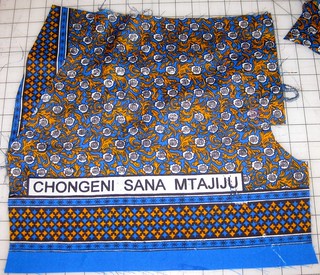 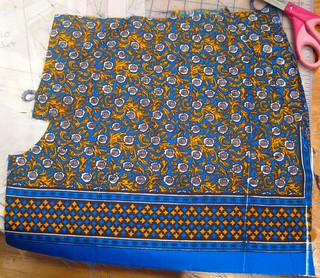 Rob & the kids went to Yosemite and hiked to the top of Yosemite Falls. 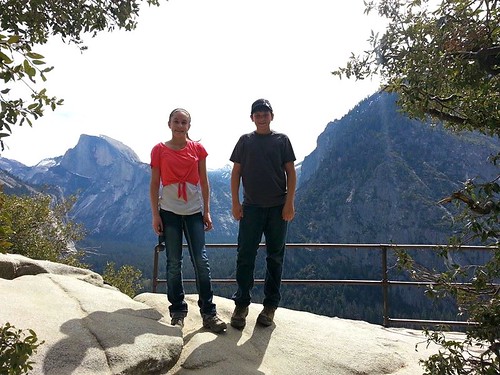 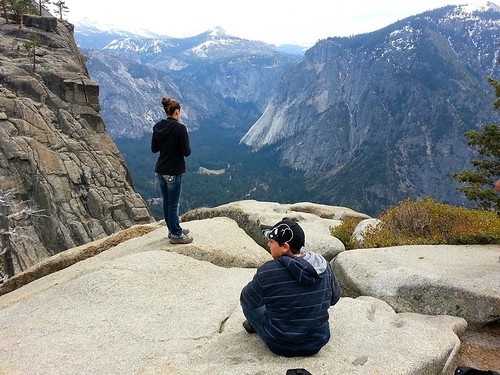 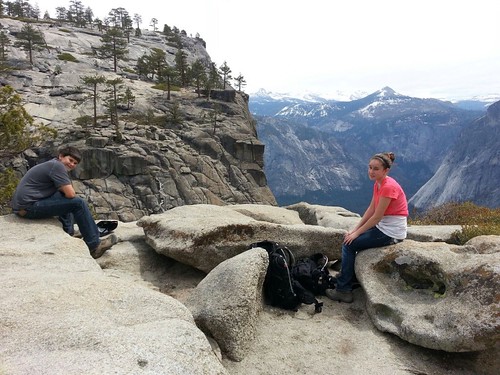 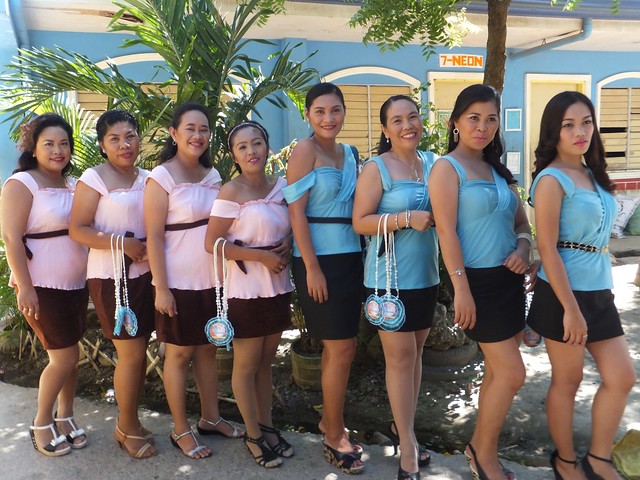 These are the science teachers at CNHS. They served as ushers for graduation. The sewing department (it probably has a better name than that) provided the usher uniforms from our fabric. Pretty cool, what?