Today is the anniversary of the Potsdam Declaration.
I highly recommend “Japan’s Decision to Surrender” by Robert Butow. He explores contemporaneous testimony on Japan’s leadership in those final days of WWII. Japan’s leadership, both civilian and military, wanted to keep their emperor; this conflicted directly with the demand for unconditional surrender and the elimination of all authority. Japan’s civilian leadership believed that this was possible if they surrendered to the UK (who had royalty) and the USA, but if they surrendered to the Soviet Union, that was it for the emperor.
While it my be true that continued bombardment of Japan with nuclear and conventional bombs would probably had eventually made it impossible for the country to continue to wage war, the two nuclear strikes did not do that, and the USA did not have additional nuclear bombs ready. Dropping conventional bombs also effectively destroyed military targets and started firestorms that caused massive infrastructure damage. Conventional strikes put more military personnel and resources at risk, but compared to a land assault, it may have been a less costly path. We’ll never know because the Soviets invaded Manchuria.
After reading Butow’s book, I think that the Soviet’s invasion of Manchuria was the breaking point. Not only did Japan lose a much needed resource that was feeding everyone in Japan, but it put the Soviet Union in close proximity. A land assault at this point would not have been just the western allies who were fighting in the Pacific; it would have included the Soviets who had just violated their non-aggression pact with Japan. So not only did the Soviets not keep their word with Japan, but the Soviets would most likely not allow Japan to keep their emperor.
And so, Japan chose to surrender to the UK and USA.
I don’t know how broadly distributed this interpretation was in the 1950s. However, I do know that the focus on nuclear weapons has been the dominant thread in more current interpretations. When I was a child, I learned the story as “We dropped one nuke; they didn’t surrender, so we dropped the second; they surrendered” which is chronologically true, but I think inaccurate.
As an adult, I’ve also heard the story that American casualties were expected to exceed 6 million for a land assault, which would have included my father and my husband’s father, but that begs the question of why not use conventional bombs to flatten Japan. Again, I think the nuclear weapon debate has taken this over: we had to use the nukes to avoid the massive casualties of a land assault. And, of course, both of these story lines are all about the USA and our choices, not about Japan and their choices at the end of WWII.

Yesterday, I wrote about how becoming a mother lead to my sewing most of my own clothing as part of Ease-in to motherhood motherhood sewing blog event.  Today, I’m going to talk about something else.

I’ve struggled with depression for most of my teen and adult life.  One therapist, and I’ve had many, thinks that what happened was a long slow descent into severe depression that started when I was a young teenager.  In addition to depression, I have an eating disorder.  Most of the time, I’d have been diagnosed with bulimia, and like many bulimics, I considered myself a failed anorexic.  Eating disorders are complicated and are not easily categorized.  In addition, there is a popular mythos that has arisen.  I don’t fit that mythos, and most of my behaviors, be they restricting or purging, were masked as “being healthy”.  It wasn’t until I was seen by someone who worked in the area of eating disorders that I was diagnosed.

Things got so bad that I thought I might lose my job.  I’m very lucky that my employer also employs the EAP counselor.  She’s on-site, and if she has space in her schedule, she can give you time even if you have exhausted your EAP benefit.  She is the one who finally, after about 30 years of having an eating disorder, diagnosed me.  I thought I was being healthy, eating carrots, apples, fat free yogurt, skim milk and drinking 2 gallons of water a day.  She helped me with the depression, and she helped me get into an out-patient eating disorder program.

It has been a long, hard road to recovery.  I think I damaged my heart when I was in my 20s and very bulimic, and I may have other health consequences from being sick for so long. But I am faithful to my therapy sessions, and I am able to manage things.  The recidivism rate for eating disorders is very high; official statistics say 30% to 50%, but based on my experience of 12 years of group therapy, I’d say the rates are much closer to 100%.  Very, very few people stay the course.  In my groups, more people have died from the eating disorder than have left the program successfully.  No, it’s worse than that: more people have died than have stayed in the program.  It could be that I am only exposed to those who have been sick the longest, and the longer one has an eating disorder, the less likely it is that one will ever ditch ED.  But I keep going to group.  I don’t want to die, and I don’t want to return to those behaviors.

The thing that has kept me going back to group is my children.  I want to see them grow up, graduate high school, graduate college, be successful adults, have children, or whatever it is that they choose to do. I’m a little apprehensive about what will happen when the kids leave home, but I have tools and support that I didn’t have before.  Fingers crossed.

Sewing and making friends with other women who sew has also helped me.  For one thing, they are a welcoming, loving, supportive group.  But they have also helped me restate how I think of my body because very few of us fit a pattern out of the envelope. They have railed against the term “figure flaws”.  They have bemoaned the fact that most of us shop and shop and shop, and still, nothing fits.  They have shown me the difference that well fitting clothing makes in comfort and, yes, in appearance.

And they have shown me how to buy lots and lots of fabric.  🙂  When I was depressed, I bought a lot of fabric.  I don’t buy very much these days.  I have a fabric cabinet, and I have tubs of fabric under our kingsized platform bed.  My goal is to only have as much fabric as the cabinet will hold.

Valuing myself enough to speak back to the eating disorder didn’t happen until after I had children, and in part, my relationship with other women who sew has also contributed to my valuing myself.  I’ll continue to mother my children, go to group, and sew up my fabric stash, and maybe, some day, I’ll be free of ED, have successful, happy adult children, have a fabulous wardrobe, and have all of my fabric in that cabinet … um, actually, it’s two cabinets, but still that is a worthy goal.

Monserratt, over at mexicanpink, are launching a motherhood sewing blog event called 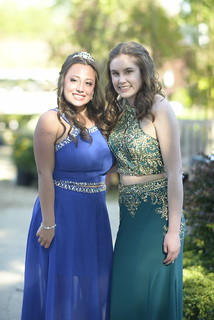 It’s been a while since I eased into motherhood.  My eldest is 17, and my youngest is 14, and that’s it, only 2. Isabel is on the right in the image to the right.  That’s from her junior prom, and no, I did not make that dress. Tony is below.  He’s about 6 feet 3 inches tall (190 cm) … at 14.  He broke his humorous a couple of months ago, and the surgeon told us that his growth plates were still open.  He’s still growing! 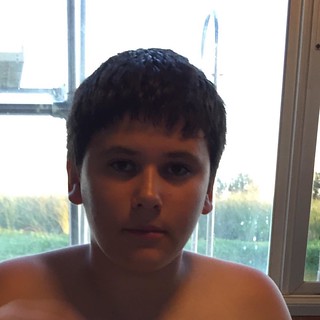 There are two reasons that I started sewing clothing.  I had been making quilts, and I liked doing that, but I’m a bit of an exhibitionist.  I love being the center of attention.  I love showing off my work, whether it is sewing, art work, gardening, or my professional work in engineering.  I want people to see what I do.  I decided the best way to show off my quilts to those around me was to wear them.  I started making quilty clothing and art-to-wear. 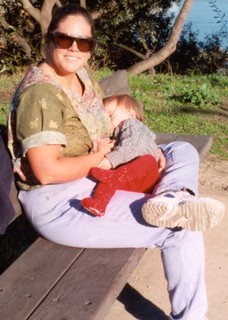 Then I had Isabel.  I wear size XXL, 1X, or 2X.  Do you think I could find nursing tops in my size? Well, I could find one or two.  They were in polyester or nylon; I prefer natural fibers.  I was into attachment parenting. The book by William Sears recommended the Nursing Mothers Sewing List, so I signed up.  The e-mail list introduced me to Elizabeth Lee Designs, which is no longer a business, but she produced patterns for nursing tops.  With the support of the mailing list members, I was off and running … I mean, sewing. I don’t have a lot of pix.  Year 2000 was before digital cameras were common, and it was a lot harder to get digital images.  The image to the right is me nursing my daughter in one of Elisabeth Lee’s designs.  I was still in my art-to-wear phase.  🙂

I made a lot of nursing tops. I made us matching tops (below).  I look at those tops below and think, “Both Isabel and I loved those tops. Why isn’t purple panné still in fashion?” It’s a lovely color.  It’s nicely fuzzy.  It’s warm and comfy.  Ah, well. 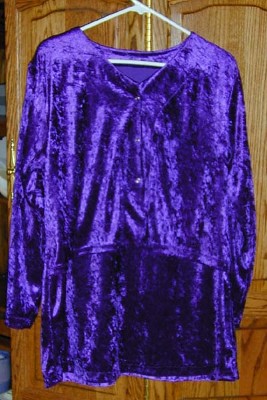 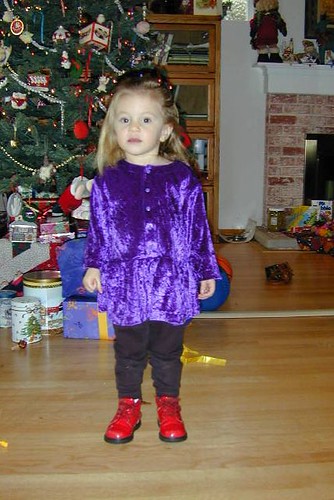 My favorite nursing top that I made was a jacket.  It also was an Elizabeth Lee design, and I put the nursing slots in it, but I never nursed either kid while wearing it.  It is pictured below. 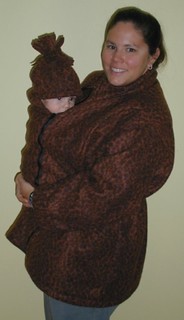 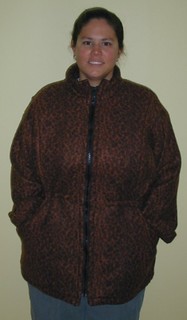 That jacket was really warm.  The center front panels were doubled, and there was a layer underneath.  It had great pockets, too.

The design had a double layer front panel that zipped in to allow for a baby in a front carrier.  I carried Isabel or Tony in a sling.  We went out in weather in the 20s F (subzero C), and Isabel or Tony and I stayed very comfortable.

In the 14 years since Tony was born, my sewing skills have improved a lot.  I make a lot of my clothing today.  I have joined a lot of sewing communities on line.  You might know me as Neefer.  I’m not as active in those on-line communities as I was 5 or so years ago, but as a result of those communities, I met some local sewing folks with whom I am now very close.